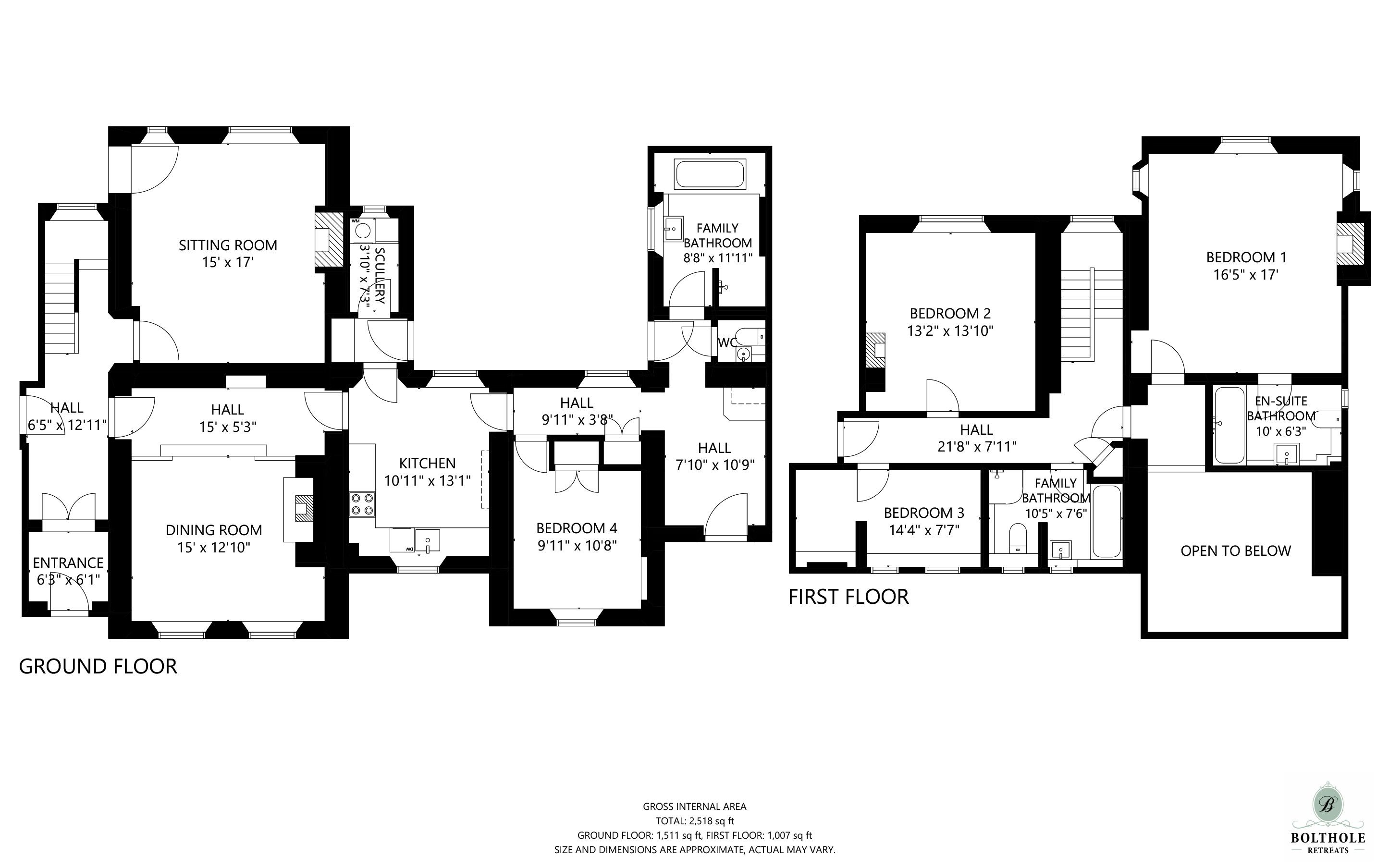 Add to Shortlist
Tucked away down an inconspicuous lane leading to a beautiful National Trust valley lies Bellhouse, the south-west wing of the spectacular Grade II listed Woodchester Park House. Sleeping 8 guests, the house has 4 bedrooms with 3 bathrooms, a cosy sitting room, well-equipped kitchen, and high-ceilinged dining room. This unique holiday home emanates a sense of understated grandeur, perfectly complimented by its old-English charm. As well as benefiting from its own private garden and courtyard, Bellhouse is perched on the edge of the National Trust owned Woodchester Park, with direct access to around 500 acres of wonderful woodland, fields and five beautiful lakes.

Family events are welcome at the property, but it is our policy not to take bookings for single sex group celebrations, which includes Stag and Hen nights, or groups where the majority are under 25 years.
Full Description

The first thing that strikes you as you enter the drive is the sheer size and beautiful architecture of Woodchester Park House. Its location is idyllic, surrounded by acres of enchanting, wildlife-filled parkland. If you’re a keen walker and looking to lose yourself in the beauty of nature, Bellhouse is the perfect property. From the house, you can walk for miles in peace and tranquillity in the valley, the only noise you may hear will be from grazing livestock or the serene gliders from the nearby Cotswold Gliding Club. You can also walk from the house up onto the Cotswold Way.

Woodchester Mansion and Park is a popular visitor attraction, now owned by the Woodchester Mansion Trust and National Trust respectively. They are a short walk down from the house into the valley. Woodchester Park itself was laid out in the 18th-19th Century (with advice from Capability Brown and Humphrey Repton). The stream through the valley was dammed to create five lakes of varying sizes, the largest of which contains a man-made island with a heronry. The lakes are home to many large carp and eels and there is a restored boat house which acts as a roost for bats.

Woodchester Park is quite literally a hidden gem that never feels busy or overcrowded. Owned by the wealthy Gloucestershire family, the Ducies, they originally built a Georgian house that stood on the site of the current building from the 1600s until 1845. In 1843 they sold their family home to William Leigh, who, on advice from Pugin, demolished the Georgian House and began to build the Gothic revival mansion that stands on the site today. Leigh died in 1873 before the work was complete, and his family, not sharing his love of the gothic revival style, employed a new architect to redesign the house before realising they could not afford to complete a new mansion. The mansion was consequently never completed, and fell through various states of semi-occupancy and disrepair before it was eventually bought by Stroud District Council in 1992, and is now leased to the Woodchester Mansion Trust who manage and conserve the building in its state of ‘glorious abandonment’, opening it to the public Friday – Sunday from beginning of April until the end of October.

Woodchester Park House, formerly known as The Cottage, had its own role to play in the history of Woodchester Mansion. The house was home to William Leigh and his family while the demolition and then reconstruction of Woodchester Mansion took place. After William Leigh died, his family stayed in The Cottage before it was eventually sold in 1938. Woodchester Park House has had a number of uses since the time of the Leighs. At some point before the Second World War it was used as a ‘home for poor girls’ who were instructed in skills such as sewing. During the war it was taken over by a Roman Catholic teacher training college, run by nuns, evacuated from Birmingham. Since then it has been used as a school (for children of leaders of our commonwealth countries) and as a field study centre.

The current owners bought the house in 1995 and returned it to a ‘home’. With 16 bedrooms (but only one bathroom and a couple of showers) work was needed. Now, Bellhouse, the rambling south-west wing of Woodchester Park House is a comfortable and charming holiday home, decorated throughout with quality antique furniture, period art and quintessential country living features such as two wood burners. This is a much-cherished property that offers an authentic homely sense of warmth and conviviality – an ideal home away from home.

Entrance Hall:
A spacious porch with plenty of hooks and room for muddy boots, leading into a welcoming entrance hall.

Dining Room:
The high ceiling in this beautiful room gives an immediate sense of grandeur, complete with unique artwork, antique furniture and tall, deep-set windows looking out across the front lawn. Set up two steps from the open corridor that continues into the kitchen, there is ample space for eight guests at the long dining table, complete with cosy wood burner at the far end.

Kitchen + Scullery:
Decorated in country creams with wooden worktops, the kitchen and scullery at Bellhouse are the epitome of well-equipped. Featuring a breakfast table for four guests, display shelves offering a vast selection of glasses, mugs and cups, microwave, kettle, toaster, electric cooker, dishwasher, fridge (freezer and washing machine in scullery) and a fantastic selection of utensils, bakeware and spices – you’ll find everything you need here! There’s even a CD player/ radio in the window to entertain while cooking.

Family Bathroom with separate WC:
A spacious downstairs bathroom with a built-in bathtub, walk-in shower, washbasin and a separate WC next door with an additional washbasin.

Just outside the bathroom, there is a door from which the courtyard dining area can be accessed.

Turn left at the top of the stairs and you’ll find a small landing area with bookshelves and balcony overlooking the dining room.

Bedroom One:
A large bedroom with beams, a high ceiling and views looking out over the garden. Bedroom One is the Master Bedroom of the house, delicately furnished in bright whites with hints of cornflower blue, a lovely selection of antique furniture including a free-standing wardrobe, chest of drawers, decorative fireplace and, of course, a lovely king size double bed.

Bedroom Two:
A bright king size double bedroom that can be configured as two singles if required. Garden-facing, this bedroom is light and generously sized, with a dressing table, free-standing wardrobe and decorative fireplace.

Bedroom Three:
A cosy twin bedroom, with single beds placed at either end to maximise privacy. Guests staying in bedroom three have their own bedside tables and reading lamps, as well as a rattan set of drawers and hook hanging area.

The outside area at Bellhouse is beautiful. You have the choice of two outdoor seating areas, one smaller table in a courtyard and a bigger outdoor dining table that can seat 8, both with access to the large rear grass garden which has two secure levels. There are garden chairs that can be used under the stairs, as well as benches and a charcoal BBQ. Electric vehicle charging point: Keba Type 2 charging point located adjacent to the property. At no cost to users (assuming reasonable use).
Full List of Facilities
On your Doorstep
Supermarkets and Shopping:
In Nailsworth town centre you will find a Morrisons. There is also a small Tesco Express store with a Post Office counter inside. A small Cooperative supermarket is also situated in the centre. Ocado, Sainbury’s and Tesco all deliver to the cottage.

Eating Out: Walks:
Nailsworth is a great place to explore the Cotswolds. There are numerous walks and footpaths to walk along the valleys and over the rolling Cotswold Hills. The walks vary in difficulty to suit everyone. Cyclists are not left out with a wonderful eight-mile, flat cycle path that winds its way from Nailsworth along the old railway line to Stonehouse. This is a great way to appreciate the many mills, industrial heritage and stunning scenery. The Cotswold Way is one of the best walks in England, covering 105 miles of the most beautiful scenery in the country.

Places to Visit: Transport: There is so much to discover in the Cotswolds, why not have a look at some of our favourite Bolthole Retreats Experiences
Points of Note
Walking & Cycling Guides

We spent our family Christmas holiday in this villa. They provided us with beautiful Christmas decorations throughout the house. We have a little baby, the villa was really well equipped for the family's comfort and even the needs of the little one :) We spent almost all ur holiday inside the house without going out because of the beautiful atmosphere and spirit. I highly recommend this place. I must say the photos don't do it justice!
Bobby
Great hosts and lovely accommodation. We went for a walk in the forest with a beautiful view on the Mansion Trust. The highlight was a zip-wire installed on the property. I highly recommend the place!
Anna
A Very special, beautiful house! Everything was provided and we enjoyed a cosy, Relaxing few days.. They loved the zip wire and swing and we enjoyed a walk in the extensive woodland bordering the property. Would definitely recommend.
Suzanne
This is a big, comfortable and very homely house in a beautiful part of the countryside. Great walks and pubs close by too! And excellent communication from the owners. We had a great time. Thank you.
Flora
The house was perfect for our overdue school reunion. Everything was as per the pictures - very large and spacious; a very cosy living room (so nice to have a wood burner with generous log supply), comfortable beds and a well equipped kitchen. The weather was terrible so we didn't have a chance to enjoy the surroundings as much as we'd hoped but we had a really lovely stay. The Rose and Crown was perfect for a nice Sunday lunch.
Holly

The Rose & Crown pub in Nympsfield is within walking distance of the house, while Nailsworth is a 5-10 minute drive, and the larger town of Stroud is around 15-20 minutes away.

Getting availability
Summary
Nights
For
Total Cost (inc booking fee)
Sorry, but your searched dates are not available for this property