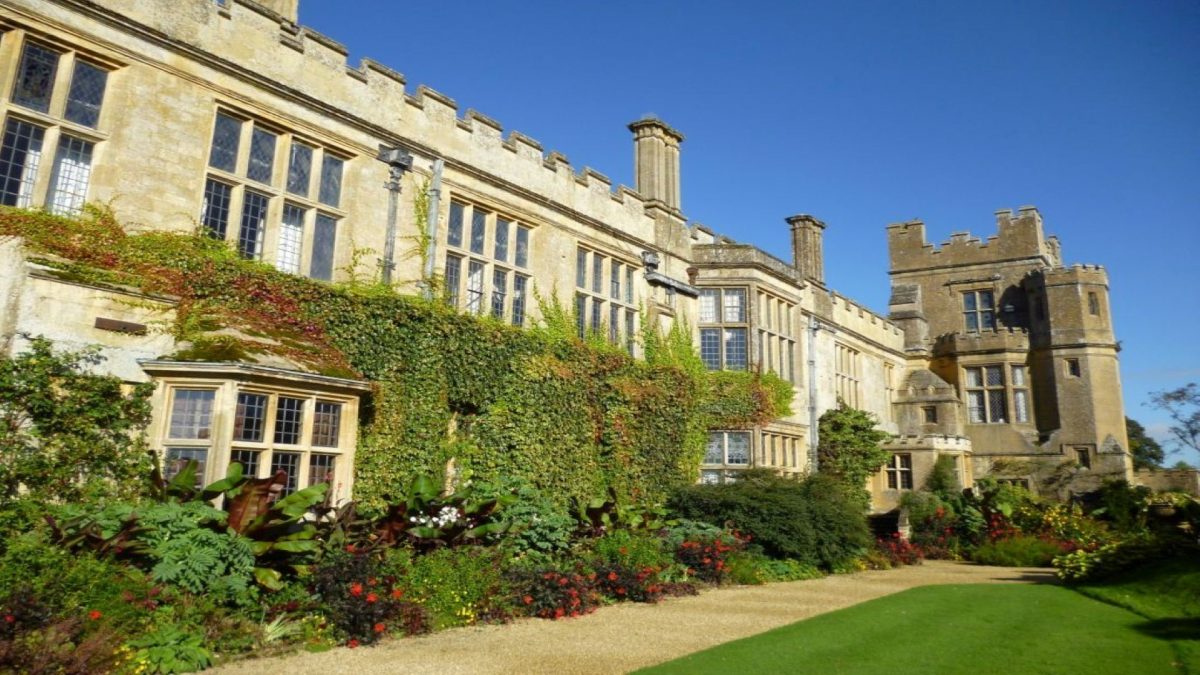 If you are enthralled by castles, their history and ancestry, the Cotswolds is a great place to visit… As part of our ‘48 Hours in the Cotswolds‘ series here’s a two-day tour for Cotswold castle and history lovers.

The name Cotswolds is said to come from the the word ‘cot’ meaning sheep enclosure, and ‘wold’ meaning hill. The area has been famous for its wool production since the Middle Ages, bringing with it the great wealth that supported the building of vast manor houses and castles. Two of the best castles to visit in the whole of the UK, never mind the Cotswolds, are Berkeley Castle, sitting between Bristol and Gloucester, and Sudeley Castle to the north-east of Cheltenham.

Located in the picturesque Cotswold village of Winchcombe, Sudeley Castle is one of the most beautiful castles in the UK. Sudeley has a vibrant and illustrious history and is one of the few castles in England that is still a residence (see the video interview below with Lady Elizabeth Ashcombe, the current custodian). A sense of moving with the times while protecting its history and legacy is very much at the heart of Sudeley Castle’s ethos today. 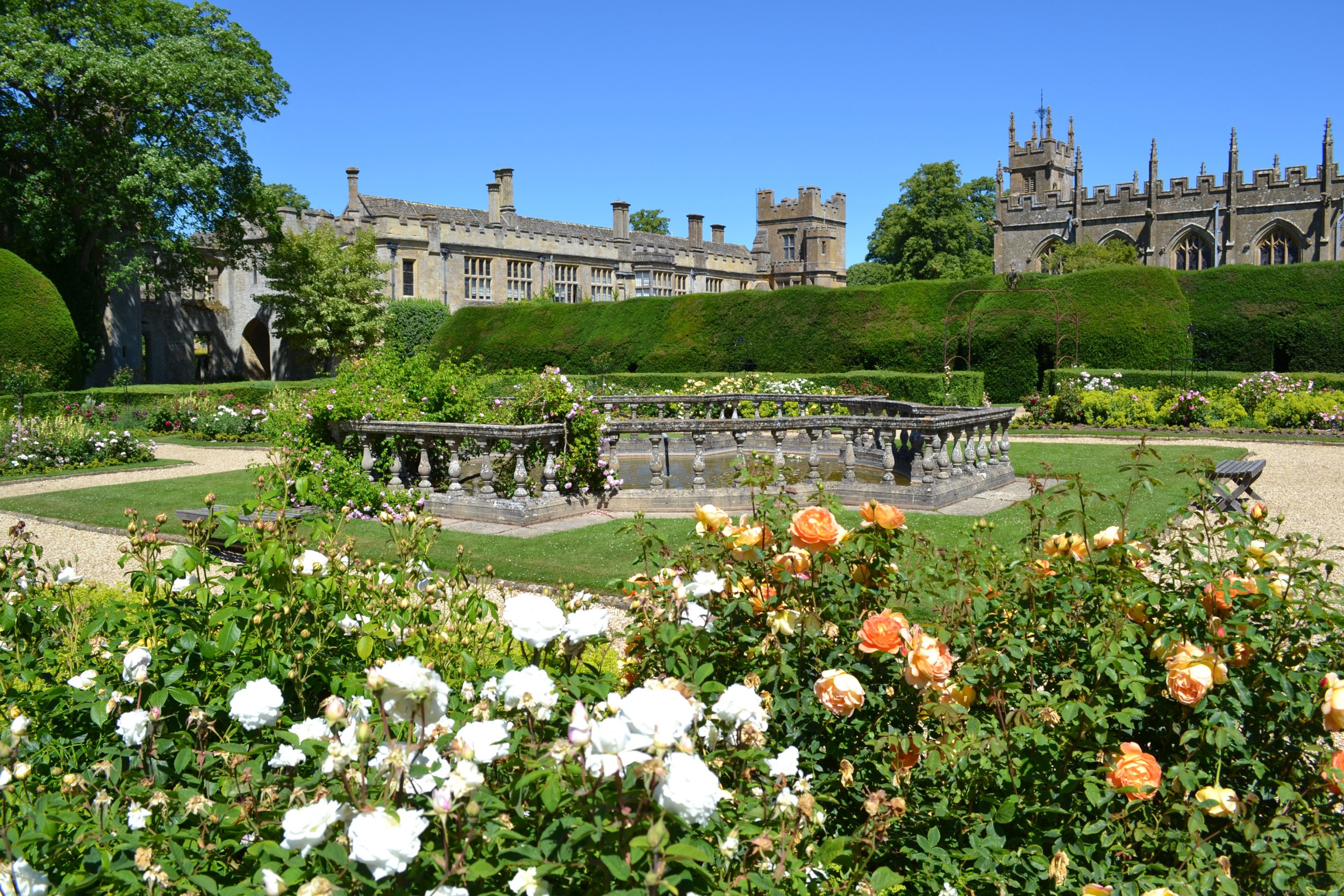 Sudeley Castle’s history began back in the 10th Century when it was owned by King Ethelred ‘The Unready’ II  who gave the Manor of Sudeley as a wedding present to his daughter Goda on her marriage to Walter de Maunt. Traces of this original manor house have been found in the Hop Yard Field to the north east of the present-day castle, but no record survives of life at Sudeley during this period, although it’s known that the estate was highly prized – its oak trees were charted in the Domesday Book – and it also included a royal deer park. Since then, Sudeley Castle has had an illustrious history touched by King Stephen, the Wars of the Roses, King Richard III, Henry VII and most famously Henry VIII’s last wife, Queen Katherine Parr, who married Sir Thomas Seymour after Henry VIII’s death. Katherine Parr brought a vast household to Sudeley, including the young Lady Jane Grey.  Miles Coverdale, the translator of the Bible, stayed at the Castle for a while and Katherine settled down to enjoy the peace and tranquillity of the Gloucestershire countryside and await the birth of her child.  On 30th August 1548 Katherine gave birth to a daughter, Mary, only to die seven days later of puerperal fever, with the funeral conducted by Miles Coverdale.

Later, Sudeley played a central role in the Civil War. In January 1643, the Castle surrendered to the Roundheads and was plundered and desecrated. It went on to be neglected for the next two hundred years, although the discovery of Katherine Parr’s tomb in the Chapel began to attract sightseers. King George III was among them and on a visit in 1788 he fell down one of the old staircases! With the prospect of the ruins becoming a visitor attraction, the Marquis of Buckingham bought the Castle in 1810. From that time it went from strength to strength, particularly when it was rescued by William and John Dent, wealthy glove makers from Worcester, who bought the Estate in 1830. It was Emma Dent, nee Brocklehurst (the wife of William and John Dent’s nephew), who truly began the restoration of the Castle to its current splendour.

After a day in Winchcombe, head south to the magnificent Berkeley Castle, less than an hour’s drive away just north of Bristol. This fabulously well-kept castle may look familiar – it was a setting in several TV dramas, including Poldark and Wolf Hall –  it’s also the last place of residence of King Edward II who was imprisoned in the castle and met his grizzly death within its walls.

The Castle, which dominates the Vale of Berkeley, is steeped in over 900 years of British history. It is best known as the scene of the brutal murder of Edward II in 1327 and for being besieged by Parliamentary troops in 1645. Over 900 years the Berkeley family have gradually transformed a Norman fortress into the stunning family home it is today, which you can see in the fascinating video below, guided by Charles Berkeley the 27th generation of the Berkeley family to have lived at Berkeley Castle.

The state apartments contain magnificent collections of furniture, rare paintings and English and continental tapestries. Some of the world-famous Berkeley silver is on display in the Dining Room and many other rooms including the Great Hall, the Morning Room (the former medieval chapel, with its unique painted ceiling) and the kitchens – all are on view during the fantastic tours lead by super well-informed tour guides. You will see a beautiful bedspread made for Queen Elizabeth I during her royal progress through Gloucestershire.

The Castle has also been used on many occasions for filming and has been involved in TV dramas such as The Other Boleyn Girl, Nostradamus, Dick & Dom, Father Brown, BBC 2’s Wolf Hall, Poldark-series 2, 3 and 4, The White Princess and Johnny English 3. In addition, Berkeley Castle has been used for documentaries such as Princes in Waiting, Great Country Houses, Dead Famous and Horse & Country TV’s epic, ‘Berkeley – An English Country Estate’.