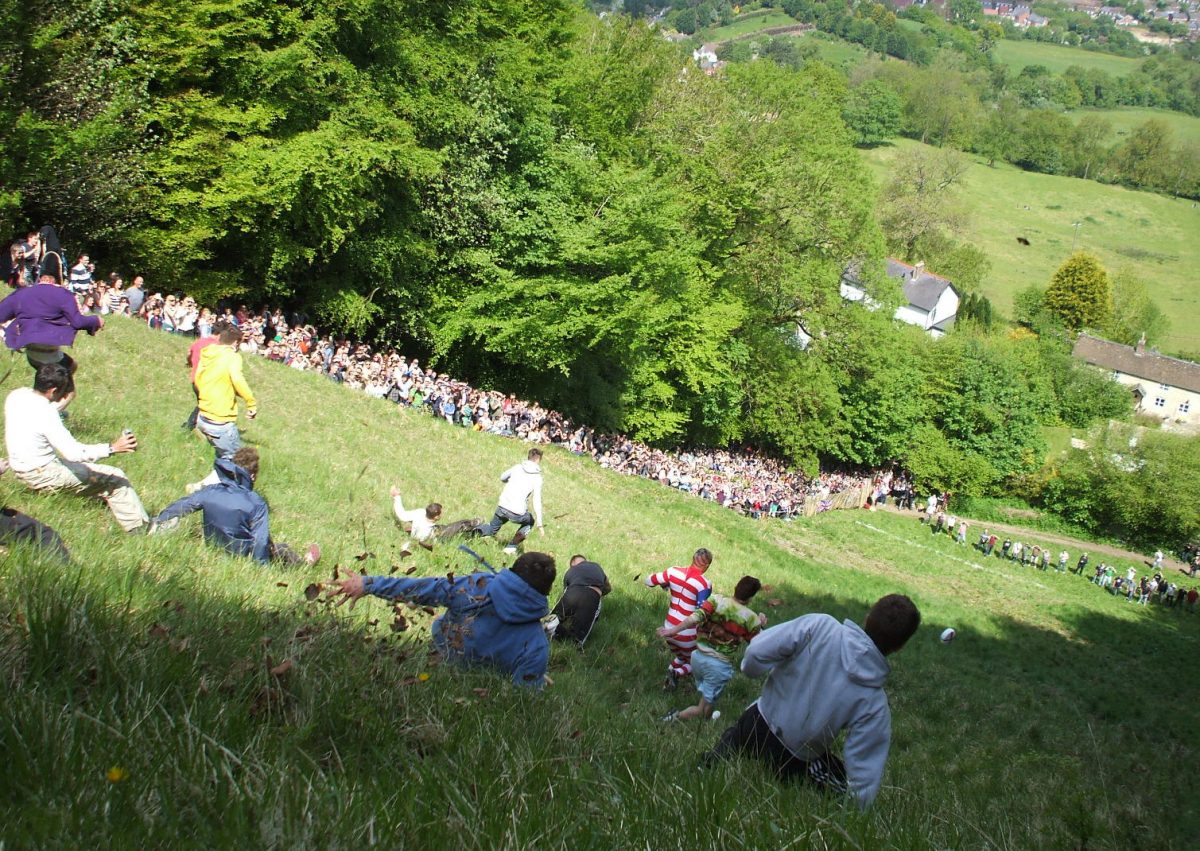 The Cotswolds is world-renowned for its beautiful countryside and exceptional walks, but perhaps less so for the number of unusual traditions and customs that have been passed down through the generations. And, when we say unusual, we mean chasing a huge round of cheese down a steep hill, a football match that takes place in the river, and rural games that include the event known as shin kicking.

We’ve compiled a list of the ever-so-slightly weird and wonderful Cotswold traditions that take place throughout the year, so you can experience a slice of English eccentricity. If you think you’ve seen it all, you might want to think again!

Although the Anglo Saxon custom of wassailing is not unique to the Cotswolds, the Stroud Wassail is a much-celebrated and honoured folklore tradition that brings the community together. The Stroud mummers’ wassail through the town to wish health, goodwill, and success to all for the forthcoming year.

The roots of the 15th century Fleece Inn are entrenched in rural England and throughout the year it plays host to a variety of events and festivals to celebrate all things English. None more so than the annual Asparagus Auction which takes place at the end of May. Alongside traditional activities and family entertainment which may include Mystic Veg – the ‘Asparamancer,’ and the fabulous local produce, the main event of the day is the auction which sees fresh bunches of local ‘gras’ tied with willow strips and auctioned off to the highest bidders. The most expensive bunch ever sold was for £750 … to a rival pub.

This does exactly what it says on the tin. An 8lb round of Double Gloucester cheese is sent rolling down the 200-yard long hill and willing participants run down after it. Cooper’s Hill has played host to the event since the 1800s and now thousands of spectators line the sides of the hill to watch the daredevil competitors chase the cheese. It’s free for anyone to watch or participate in but it’s not for the faint-hearted. Bumps, bruises and even broken bones are common place and very few people make it to the bottom on their feet.

First held more than 12 centuries after the last ancient Greek Olympics, founder Robert Dover established the Cotswold Olimpicks in 1612. Events include Championship of the Hill, an unusual relay race that uses objects such as wheelbarrows, hay bales, and dustbins, as well as the classic tug o’war and most famously, shin kicking! This ‘sport’ has been around since the original games and sees opponents hold each other by the shoulders while landing their best kick. Thankfully, a few more rules have been implemented since the 17th century.

This ancient festival dates back to the Middle Ages and involves a colourful procession of locals who guide the Wap Mayor and Queen through the village. The designated ‘Mop-Man’ clears the way and wets the crowd with water, and the Mayor is then dipped in the pond! Afterwards, a cheese that has been blessed and rolled down a hill is divided up and eaten. Festivities include an English country fayre with stalls such as the coconut shy and events that include ‘welly wanging.’

Formerly home to one of the best wool and yarn markets in the country, this race is as much about celebrating Tetbury’s heritage as it is about proving who’s the strongest competitor. Dating back to the 17th century, the idea of woolsack racing was born from drovers who would run up a steep hill with a very heavy sack of wool in a bid to impress the local ladies! Men’s sacks weigh 60lb while women’s way 35lb, and they must carry their sack above their head as they run the 240-yard course up and down Gumstool Hill as part of a relay. There’s also a mini-event for local school children.

Football in the River, Bourton-on-the-Water

How or why this tradition started is not entirely clear, but one hundred years later it’s still going strong. Two teams take the usually calm waters of the River Windrush which runs through the heart of the village for a unique game of footie. The water varies between ankle and knee-deep. It’s great fun for spectators to watch but be prepared to get wet!

Each Boxing Day, thousands of spectators shake of their Christmas Day slump and line the banks of the River Coln in Bibury to watch the now-famous Bibury Duck Race. There are two races to enjoy – the first features 150 realistic decoy ducks who are released to bob gently down the river to the finish line. Spectators can sponsor a duck for £10 and if your duck wins, you’ll get to nominate the charity you would like to receive all the day’s proceeds. The second race features thousands of yellow rubber ducks that you can sponsor for just £1 each. It’s a sight to behold and there are prizes for the first 20 ducks over the line as well as for the very last one too.

This remarkable sight takes place every Boxing Day when at 11am the town crier leads a procession of the Marshfield Mummers – dressed in the traditional costumes covered in strips of paper – through the streets of the village. They then perform the Ancient Marshfield Mumming Play, which features characters such as Father Christmas, Saucy Jack, and Old Father Beelzebub. Perhaps what makes this folk play so special is that no part of the script or songs are written down, instead, it is passed through the generations by word of mouth.

Surfing the Severn Bore, Gloucester and others

Takes place: Various, but usually best during the Spring and Autumn Equinox

The Severn Bore is one of Britain’s few true natural phenomena, where the tidal range on the River Severn is the second highest in the world. First surfed by a British soldier in the 1950’s, it’s now a competitive sport with dozens of surfers vying to record the longest ride. They’re usually accompanied by thrill seeking canoeists and windsurfers. Unless you are an expert it’s not a recommended activity, but there are some excellent viewpoints along the river.