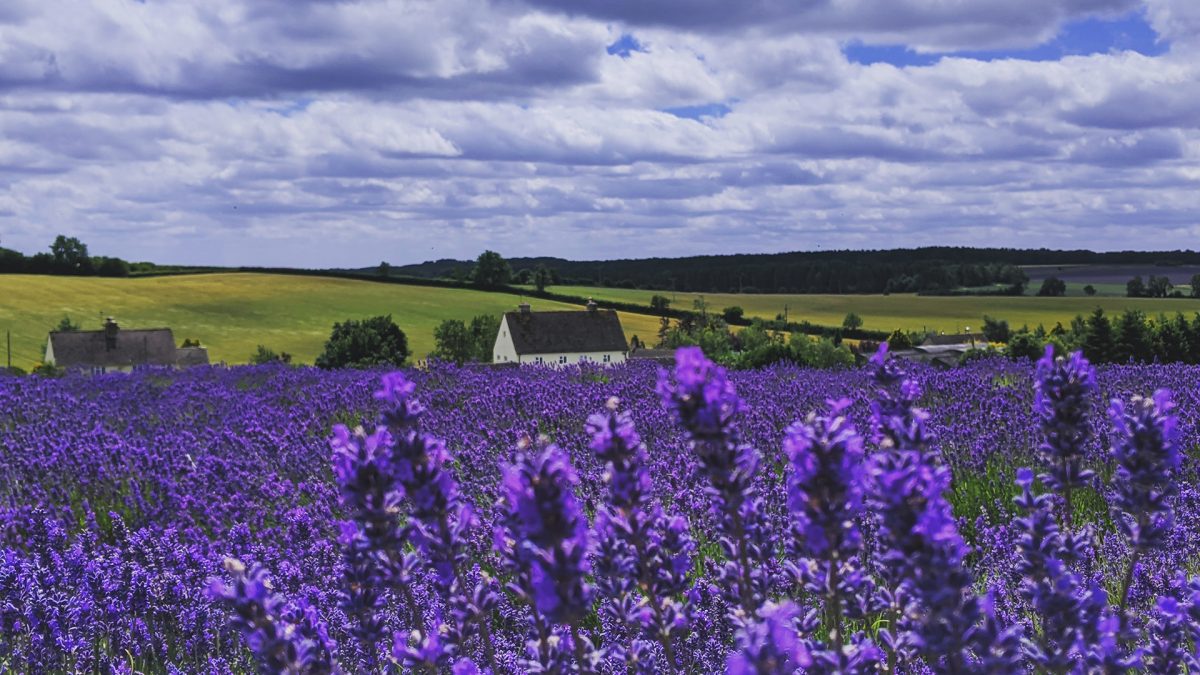 Forever immortalised in the age-old English folk song and nursery rhyme Lavender’s Blue, the true origin of lavender goes back much further in time. It was first planted by the Romans back in 77AD (as an insect repellent as well as a flavouring for food) and has long been renowned for its calming and restful properties. Originally a native of the Old World, its unmistakable blue spikes can now be found the world over from the Australian state of Victoria to the Pacific Northwest reaches of the United States, but one of our favourite places is right here in the beautiful English countryside at Cotswold Lavender.

High in the Cotswold hills, Cotswold Lavender sits on a third-generation family farm overlooking the pretty village of Broadway and Vale of Evesham. Lavender performs best in poor ground and the free-draining limestone soil makes for perfect growing conditions. Each June under the warmth of the summer sun, the surrounding fields explode into colour with row after symmetrical row of fragrant flowers stretching off into the distance.

You need to plan your visit however as the lavender season is short. As soon as the plants come into bloom the harvest must begin to ensure the flowers are at their peak for use. At Cotswold Lavender, the best time to see the fields is usually early to mid-July before the late July harvest, but they are of course at the mercy of the often unpredictable, British weather.

Broadway is the perfect base for an exploration of the Cotswolds with a charming high street lined with Cotswold stone buildings and independent shops and plenty of places to eat, it’s also just three and a half miles from Cotswold Lavender. Box Cottage is a pretty cottage that sleeps four, tucked away in a quiet mews close to the centre of the village whilst Swallows Rest, is a beautiful country home in peaceful Laverton that sleeps six, less than three miles from Broadway.

Whilst regularly used in aromatherapy and skin care it’s also a well-loved but perhaps slightly less well-known cooking ingredient. Lavender is a member of the mint family and has been used to add aroma to food for thousands of years, particularly in Moroccan dishes. English lavender is generally regarded as having the sweetest fragrance and most commonly used. Adding a few drops of essence to often-tart fruit such as plums and rhubarb can make a world of difference. It’s particularly good in jams and the heady-perfumed spikes can also be used as you would rosemary with lamb. You should definitely adhere to the ‘less is more’ rule however when it comes to lavender. It’s a potent herb and can easily overpower a dish leaving you with the less than appetising floral notes of potpourri, rather than a gentle and subtle flavour! Try adding a sprinkling to scones and flapjacks or into a summer fruit crumble.

Cotswold Lavender lies on the edge of the pretty village of Snowshill (Snowshill Manor is also a must-do when you’re in this part of the world) and whether you’re looking for the opportunity to spend a few hours in the glorious Cotswold countryside and take some Insta-worthy pictures (the views are spectacular), get your hands on some lavender-scented skin care or bath products to turn bath time into a relaxing haven of all thing’s lavender.