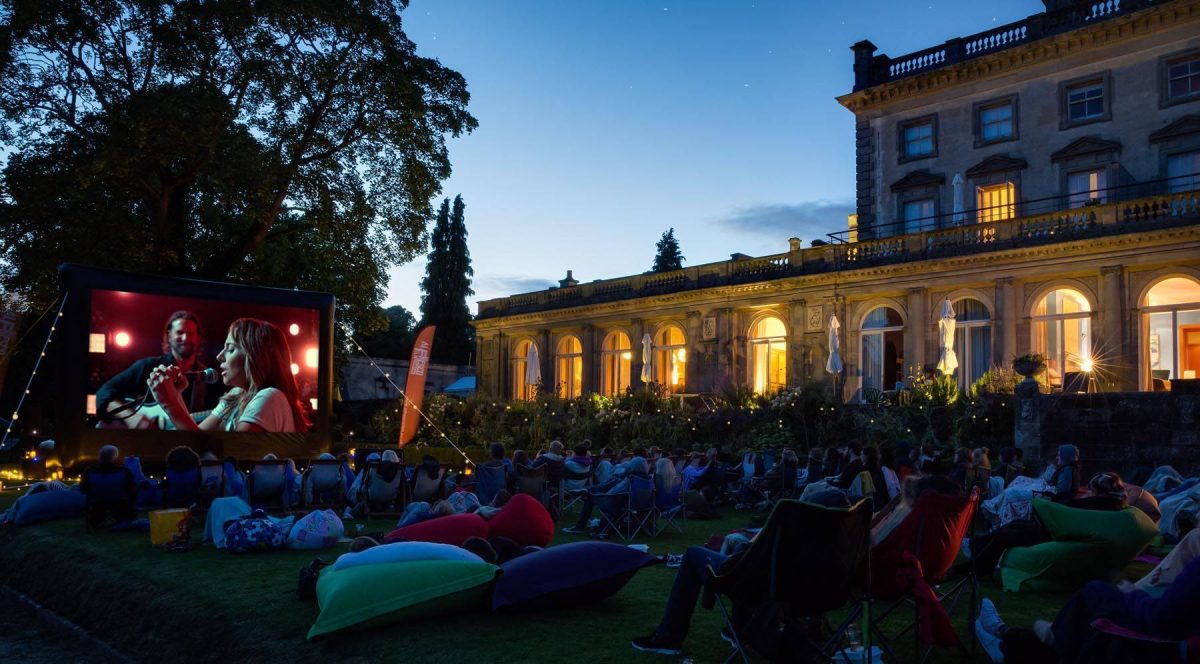 Because who doesn’t want to spend a blissful summer evening at one of the Cotswolds’ most glorious locations enjoying top-notch entertainment!

A night out under the stars on a warm summer evening watching a big screen golden oldie or live theatre production – is there a more idyllic image? Throughout the summer, many of the Cotswolds’ most beautiful and impressive landmarks play host to pop up screens and stages – perfect for a family outing, romantic date night, or a fun get-together with friends.

This list is not exhaustive by any means and new events pop up as the year progresses. All you need to do is book your tickets, pack up a picnic (don’t forget the Pimm’s!) and maybe a cosy blanket to keep you snug and you’re all set for a night under the stars.

Touring the UK this summer the Gun Powder Plot is an explosive and fun evening as five actors endeavour to pull off the most infamous event in English history. Intrigue, chaos and mayhem ensue along with many, many false moustaches!

Enjoy a performance by one of the UK’s finest touring theatres; The Lord Chamberlain’s Men as they present As You Like It in the same guise as when first performed for William Shakespeare – with an all-male cast, Elizabethan costumes, singing and dancing and in the open air. This rustic romp is packed with fun and frolics and even a little wrestling! There is plenty to keep you entertained.

Spend a magical evening under the stars immersed in one of Shakespeare’s most famous plays. A comedy tale of magic and chaos set on the most bewitching of nights when fairies are on the loose and four young lovers find themselves embroiled in an enchanted forest, whilst a feuding Fairy King and Queen cause mayhem.

Be captivated by an outdoor performance of Kenneth Grahame’s much-loved children’s tale, the Reluctant Dragon. This dragon is not like other dragons though! Rather than breathing fire and terrorising villages, this one prefers to write poetry and really would rather not fight. This delightful tale of bravery and friendship will enchant audiences of all ages.

The classic tales of Benjamin Bunny and the Tales of Peter Rabbit are adored by generations of children and this outdoor performance will keep you all spellbound. Will Peter and Benjamin escape from Mr MacGregor’s garden and who did make all those footprints in the flower beds?

This fun and energetic bicycle-powered show is performed by the Handlebards, a troop of cycling Shakespearean actors who carry their props and costumes on the back of their bikes. Enjoy the laugh-out-loud product of Twelfth Night where you’ll witness much frivolity and madcap capers.

Treat the family to a fabulous open-air performance of Rapunzel. Wicked witches, swoon-worthy princes, trolls and a princess with very long hair come to life in a fun adaptation of this classical fairytale. There’s plenty to keep audiences of all ages entertained.

Against the spectacular backdrop of Sudeley Castle and Gardens, sit back and soak up a performance of As You Like It. Presented as it was first seen by William Shakespeare this all-male ensemble is hugely entertaining as they sing, dance and laugh their way through the sparkling comedy.

Journey alongside Ratty, Mole, Badger and the larger-than-life Mr Toad as they embark on adventures through the Wild Wood and along the river. This musical adaptation uses song, light, sound and traditional English folk melodies set to new lyrics to paint a vivid picture of Kenneth Grahame’s much-loved classic tale.

Nobody puts Baby in the corner! One of the most famous movie lines in film history. Enjoy a music-filled evening at Berkeley Castle as Open Cinema opens its summer season with this all-time favourite – Dirty Dancing. Other dates later in the year are available with films to be announced.

Head to the magical setting of Compton Verney for a memorable evening with a film under the stars. The film lineups will be announced in late spring.

With classic films such as Ghostbusters, Grease and Jaws on the schedule, what better reason do you need to spend an evening in the landscaped gardens of Cheltenham’s Sandford Parks Lido?